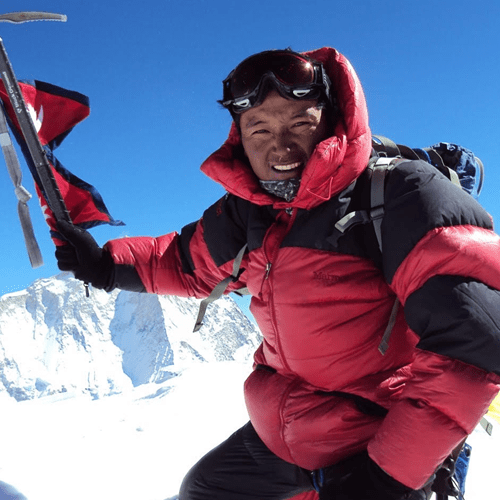 The Sherpa people have been known as “The Guardians of Himalayas” worldwide for generations. In the crystal white peaks of the Himalayas another Sherpa was born in the heart of Everest Region, he would become a
master of the mountaineering field and passionate about continuing his legacy as a climber.

Jangbu Sherpa was born on April 30, 1980, in the small village of Jubung, in the famous Solukhumbu region. Being born and raised into a trekking and mountaineering family Sherpa, followed in his father’s footsteps from the early age of 12, and regularly experienced thrilling expeditions.

Since 2003 Jangbu has summited Mt. Everest 16 times along with many other Expeditions completions such as Manaslu, Cho Oyo and Ama Dablam. In May 2006, Jangbu also set a new record by standing without his suit or top on at Mt.Everest Peak for 4 minutes and 40 seconds!

Jangbu looks forward to continuing his work in the Himalayas and sharing his passion with our clients.